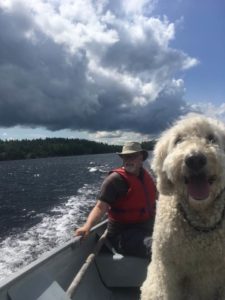 Dewey was born almost 14 years ago, in an Ontario town I can’t recall. He was the only boy puppy left of his litter, and he sat timidly in the back of the pen, trembling amongst all the girls vying to come home with us. We chose him on the spot, of course.

His first days were spent sitting and hiding in a pile of shoes near the back door, which was adorable until he began to eat them. We lost a lot of leather in those early days. Also, socks. As he came out of his shell, Dewey would lie in wait to pounce on our children as they walked by him innocently, not knowing what was coming. At the cottage, he’d chase after them and try to herd them like a sheepdog would, only not as effectively, onto an old dock out front. He seemed to be trying to paw his way up thorough the hierarchy of our little pack by trying to get rid of our children one by one, or certainly by putting them in their place. We taught them to bop him on the nose to keep him in his place, which eventually worked and Dewey accepted his dogginess and his singular role as family pet with grace and equanimity.

Always convivial and an enjoyer of frequent visits with people of all ages, Dewey passed his tests with St. John’s Ambulance, and in his prime, volunteered as a therapy dog visitor. Donning a bright red scarf, Dewey was warmly welcomed as a warm-up activity into circles of seniors about to do chair yoga. He moved from wheelchair to walker, greeting everyone equally with warmth. His visits expanded into senior apartments where grannies had their adult children buy him dog treats as a little reward for visiting. Those were good days. Once an elder himself, however, he expressed his impatience at being trotted around a little bit like a circus clown, and announced his retirement through loud barks that made little old ladies jump in their wheelchairs in really awful ways. Anticipating being fired, Dewey voluntarily hung up his scarf, but continued to welcome visitors into his own home for years after.

Well-loved, well-walked, an explorer of wood and trail, a resolute non-swimmer and ever-disdainful of fetching, Dewey was splendid. 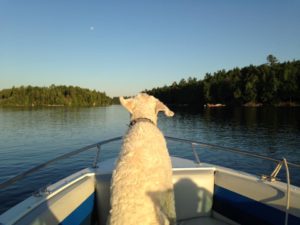 A good dog is not hard to find. They are everywhere. Dewey was especially good at being good. Our dog friends give us so much. They teach us how to be a best friend. Their final lesson to us is a reminder that life is full of so many small arcs of love and loss, over and over again. First, it’s “Hello cutie” and a scratch behind the ears and then before you can believe it, it is “Goodbye. I really loved you.” They remind us it is all worth it.