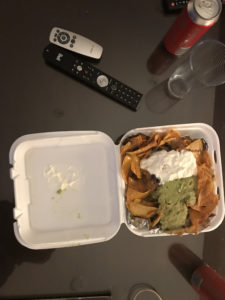 To sleep tonight, I had to write an article today. It felt a little bit like climbing a mountain to get to that beautiful valley tucked in its shadow on the other side, except with notes and highlighters and my laptop and no actual valley, and a little bit of a messy house.

“I need a reward,” I said to Brent, because that’s what I need to work my freelance life sometimes. The anticipated after-glow of completion is just not enough, and especially not today with this particular piece, which was an examination of the governance issues in the union of four seminaries engaged in competency-based theological education.

I thought about a book I could download on kindle, or a face serum (yup!) that I’m almost out of that I could restock online, but these are necessities and it was hard to lie to myself that they were rewards. Then I remembered Mexican food. Driving home from our Saturday morning walk, we recalled nachos we have loved. And then I also thought of a new movie which features Gerard Butler and a comet hurtling to earth.

I finished my piece in about four hours broken up only by multiple refills of lemon water and Brent bringing me the chicken salad plate he made me for lunch. I re-read it many times. I composed the email to the editor, attached my article and hit send, bidding it adieu, maybe even for forever. Immediately, I opened my sent folder, found the email, opened the story and read it again, because that is one of the weird-writer things I do, every single time. I almost always see something I should have spotted 30 seconds prior. Sometimes I email the editor so they will know that I know that they know that I know, but today I didn’t bother.

Brent’s workday changed, requiring a re-set nap for him and his brain. He texted me from upstairs to reassure me that even so,”We’ll still have a reward night.” And then he texted me again to come on up so we can talk about our plan. When I said “Where should we get our Mexican food?” He said: “Mexico.” That was funny and wonderful, I thought.

I love Reward Nights. And I think you should have one soon too.