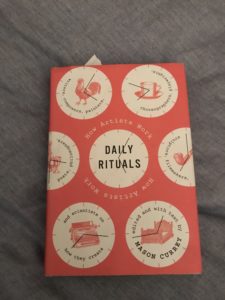 Ta da! This is an announcement that I have finally finished Daily Rituals: How Artists Work, compiled and edited by Mason Currey. My sometimes-writing partner Patricia owned it first, and intrigued, I ordered it from a bookstore called Perfect Books, using a gift card given to me by another friend. (So, a perfect combination of recommendation, a walk on a clear day to a bookstore, and a gift).

I read Daily Rituals slowly, like a little treat at night before I turned off the light, or in the afternoon during a break in my own daily work.

Readers peek into the creative working lives of 161 artists of all kinds, and the “daily rituals to get done the work they love to do.”

I can report that Truman Capote worked for four hours a day, writing mostly while lying on his bed, and revised his work in the evenings. My beloved Alice Munro wrote, at the beginning at least, during her children’s nap times, and then later when they were in school. Thomas Mann was always in his study by 9:00am, where he wrote undisturbed until noon. (It amazed me then and it amazes me now that I once worked for Margaret who worked for Elisabeth, the daughter of Thomas Mann. I was appropriately awed by and deeply tongue-tied around Elisabeth and if memory serves me correctly was once gently scolded by her during my summer job at the International Ocean Institute in Halifax, which Elisabeth Borgese founded, along with the other chapters around the world. We said “in Malta” a lot in the office. Isn’t that cool?).

This collection of working patterns by Mann and the others were all unique, except for one thing they had in common, which is that they existed. There was a pattern. These highly creative and accomplished writers, artists, musicians and super-smart math people, all discovered how to work well within the possibilities and limitations of the space and the time they had.

And then, they hit repeat.

Inspired, I wondered how my own daily ritual could be fine-tuned for better, deeper work?

What is working and what could be tweaked with whatever it is that you are involved in making, or dream of creating? What sonata, play, novel, or cosmic challenge could you solve, if you sat down in the same place at the same time for most (some?) days each week?

It helps to name your current patterns now. If I imagine someone writing about my own rituals for Daily Rituals: How Writers Work who Sometimes get Lucky Even Though They are not all That Disciplined, they would include:

Those aren’t the whole story of course.

Our creative rituals change with our space and our lives, and sometimes our projects. If I am working on My Own Stuff — as I call it — I have found in this particular house that going upstairs to our bedroom and writing while stretched out on our bed (Capote style!) works for me. Usually — ritually — I schedule this writing time ahead, noting it in my calendar as an appointment. My phone? Tantalizingly out of reach, volume off. Wifi on my laptop is turned off, if I have found the strength. My feathers are, ideally, unruffled. Please don’t yell up and ask me things. I need to be at an emotional medium-level blah, with a big glass of water beside me on my nightstand, that I might spill. Then, read. Write. Revise. Repeat. Recover.

If someone was going to write about your daily ritual, how would they describe it now? Or better, how would you want them to describe it?

7 thoughts on “What is your daily creative ritual?”