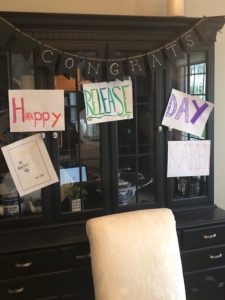 I actually have no idea what a book launch day is supposed to look like. Maybe they are all like this?

I started with my espresso and a zoom meeting with the team from Tyndale House. Andrea’s children had made celebratory signs that hung behind her on a wall. One said “Karen.” That touched me, to imagine a young person I haven’t met carefully printing my name and having all five letters fit perfectly, with no smushing at the end at all that I could see.

I purposely had scheduled my monthly meeting with my spiritual director for today, because I thought my ego might need to be corrected, or some other spiritual admonishments and administrations would certainly be in order. Margot listened well and dug around gently, like a kind gardener wearing delicate gloves. I had a work call with my beloved Faith Today team, and we were all as cheery as a bunch of friends in a pub meeting up for lunch, maybe because we waited to meet a little later in the morning, rather than first thing like we usually do.

Then a friend FaceTimed me. I thought, “How sweet,” until she asked me if I had FaceTimed her for any specific reason, and that she had a meeting about to start. I acted as if I had called her, because, who knows, maybe I had. Sometimes I do FaceTime someone and then stand shocked, wondering how it happened and scrambling for the red kill circle before they answer and see my panicked, pale face and increasingly crazy hair. Either way, it was lovely to see her. She’s even in my book.

I walked with my dog and my daughter to Shoppers Drug Mart where I splurged on Goodies, Nibs and Lysol Wipes. l felt I had found a treasure. 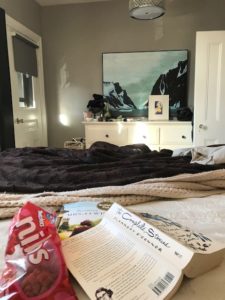 Everyone left on an errand, and my Dad called.

I laid on my bed and picked up The Complete Stories of Flannery O’Connor, and started at the back to work my way in reverse toward the middle, where I surrendered to despair quite a while ago.

I can hear my family making me dinner downstairs, like they used to do on my birthday every year. They were co-conspirators back then, yelling up to ask me where the big spoon was, or the cake pan or why there were no candles. Then maybe a little yelling at each other. There seems to be less fighting now than there was back then, which is its own reward.

I was told to dress nicely. And I will.

3 thoughts on “Licorice, Flannery O’Connor and I did also get more Lysol wipes”